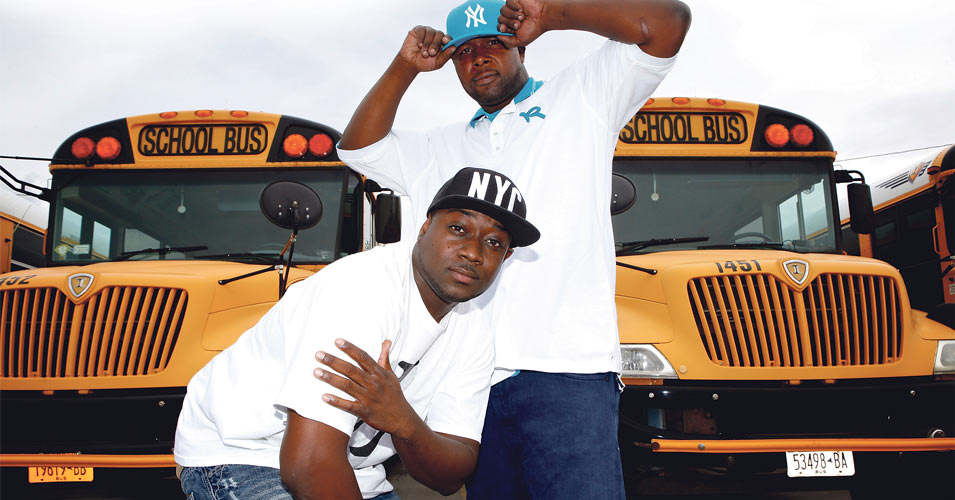 Hip-hop music doesn’t typically call to mind the description “kid friendly.” But Syracuse musicians Samar Moseley and Tyrone Jackson have found inspiration in their day gig as bus drivers for the Syracuse City School District. While other rappers may boast about street violence or ill-gotten riches, this duo—known as 1306—applies catchy beats to cautionary raps on bus safety and working toward graduation.

Last year, 1306 released a three-song EP, Mr. Bus Driver, with positive raps on school-related issues. They also performed at city schools. In an interview with Family Times, Moseley, 35, said that while he and Jackson, 37, continue to work on all kinds of musical collaborations, he thinks 1306 can find a sizable market for its positive messages. Moseley is the primary lyricist while Jackson handles the beats and engineering. The pair, who started driving buses in 2011, is enthusiastic about what the future holds. The following is a portion of that conversation.

You met during your bus driver training. How did that lead to a musical partnership?

Tyrone Jackson: I was talking with someone else about music. Samar overheard the conversation and that’s how it got started. I invited him over to my home studio. We recorded a couple tracks. We just started from there.

Samar Moseley: The first songs we did were, like, club songs. But this “Mr. Bus Driver” song just came out of nowhere.

Moseley: We had to keep it simple. “Classics for the classroom,” that’s what we like to call it. Our CDs have now become popular in other states. I’m from Minneapolis originally, and they play this in day care centers. After more than a year, they tell me it is still the only thing the kids want to listen to.

Jackson: When we started driving, I was Bus Route 06, he was Route 13. So we just said, “Route 1306.” The concept behind that is, going down a new journey, taking a new route to success.

It says on your website that when you first started driving, you were surprised by how differently children behave now compared to when you were kids. What specifically?

Jackson: Kids are going to be kids. You can only guide them the right way; it’s up to them to make choices. People see a bus and they just think, “Oh, that’s an easy job.” It’s really not. Every kid’s life on that bus is in your hands, and you are the captain of that ship. The best way to teach something is to make it constructive and fun. You can learn the rules and have fun singing songs, dancing. It’s a good feeling.

If you establish a relationship with a kid, they’ll sit and talk to you. They’ll tell you how their day is going. They will tell you if they are being bullied, or what is going on in their household. You become somebody they look up to.

Moseley: On my bus, a window got shot out with a BB gun. That’s what really changed my whole thinking process with the kids. After that, we had to do something. You see bullying on the bus; you have to separate kids. There’s a lot of that going on. There are
a lot of little things that they do.

Moseley: My bus right now has no problems: no standing up, no throwing stuff out the windows. They don’t disrespect my monitor, nothing else. That’s great.

How did you approach the school district with your music?

Jackson: When we finished with Mr. Bus Driver, I took it to my safety supervisor. He didn’t even finish listening to it before he started making phone calls. Next thing you know, we are having meetings with the school district, talking about where this can take us. Then it got to Albany and was approved to be sold to the kids. It takes a lot to be able to present anything to kids in schools, but they approved us for all of that. We could play the songs on our buses; we can perform in a school. It was like we got the key to the city with the school.

What influences you as songwriters?

Moseley: I used to be a beat boy, a break dancer. When I was 5 or 6 I was in a documentary, me and my brothers. It’s called Breakfast on Broadway. We had a big break dance crew back in Minneapolis. So, I’ve always been out performing. In junior high, I started realizing that I could write. For a long time, I didn’t let nobody hear my raps, just my closest friends. When I got older, I started going to open mic nights. Once I got that attention from the crowd, it was like “I could really do this.”

My life was kind of crazy. I’ve got two older brothers in two rival gangs. I told my mom that I was going to do something to get us out. That was my mindset, even when I was 8 years old. Music is what helped me stay positive.

Jackson: Music is about life experiences, whether it’s your experiences or somebody else’s. You’ve got to have relatable music, you know?

Moseley: And it’s got to be creative.

You guys are not dads yourselves, but, Tyrone, you’re raising nieces and nephews at home (three boys, three girls). How old are they?

Jackson: My youngest is 6; then I have twins — they’re 10. Then I’ve got a 12, a 14 and an 18. I treat them much like the kids on my bus. I don’t sugarcoat nothing. We have rules, and they’re going to be followed. I put my foot down just like I do on the bus. I tell them, “Priorities equal privileges. If you do what you are supposed to do, then you get to have fun. But you’ve got to earn it.” It was hard in the beginning, but they’ve been with me for a year and a half now. They got it. We’re smooth sailing.

Has this project influenced the way you think about the community?

Moseley: Yes. If this actually becomes something big, I’d like to start a non-profit called KEYS: Keep Every Youth Safe. Because kids are like keys: They’re real easy to lose, but you can always find them again if you look in the right places. Tyrone’s got a project, too: All Grown Up. We just want to bring something to Syracuse that can be positive for kids.

Do teachers suggest ideas for songs?

Jackson: (over Moseley’s laughter) They try. They try. The last request I had was to do a motivational song to help get people ready to take tests. That’s what (our song) “I’m Graduating” is about. You can’t get more uplifting than that!