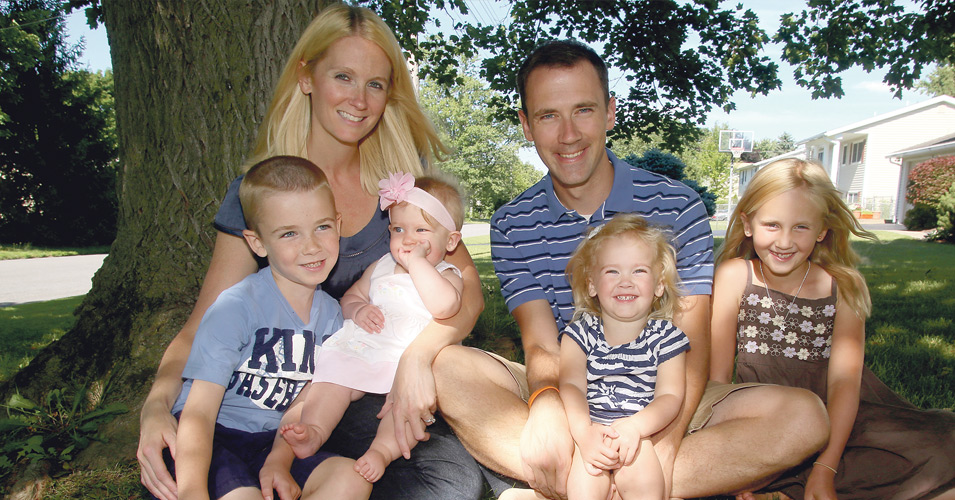 When Sarah Schiffer gave birth to her son, Danny, six years ago, there was nothing amiss. A healthy, bright-eyed boy, Danny joined big sister Emily (now 7) and Sarah and her husband, Don, in the busy Schiffer home in Camillus. A few weeks later, Sarah noticed a strawberry-colored patch of skin forming on the right side of Danny’s face.

“He wasn’t born with it. In fact, I didn’t notice anything until he was about 2 weeks old,” Schiffer, 34, recalls. “At first, I just thought it was the acne that babies sometimes get.”

The Schiffers were referred to a pediatric dermatologist, who confirmed that Danny had developed a hemangioma: a dense group of blood vessels that can protrude from the skin. Hemangiomas typically appear during the first three months of a baby’s life, sometimes growing rapidly in a few short months. By the time the child is a year old, most hemangiomas are as big as they are going to get.

Hemangiomas are common. About 10 percent of all infants develop hemangiomas and, of those, 60 percent form on the head, neck or face. However, because they can appear suddenly after birth, and grow so quickly, parents can become alarmed by the dark red growths.

“Our family doctor said that there probably wasn’t anything we could do. We took Danny to the dermatologist just to be on the safe side,” Schiffer says. “It was not recommended that we do anything except to just wait it out. The doctor assured us that it wasn’t bothering him at all.”

Danny’s hemangioma eventually grew to about the size of a half-dollar. Yet it was never a concern for him.

“He hardly even noticed it,” Schiffer says. “When he was very little, kids did ask questions once in a while. We would go to the park or something and kids would ask, ‘What’s that?’ But he forgets that he has it because he doesn’t see it. Just recently we were talking about it, and he had no clue where it was.”

Today, Danny’s hemangioma is a fraction of its maximum size and easily missed at quick glance. But the Schiffers still needed their dermatologist’s number. Daughter Callie, now 2, did not develop any hemangiomas, but the Schiffers’ fourth child, Bryn, now 9 months old, developed one on the top of her head at around 5 weeks of age.

“Hers wasn’t visible until later. So, I kind of thought we were in the clear,” Schiffer says with a chuckle. “But we weren’t. At first, hers looked like a little port wine stain.”

Bryn’s hemangioma protruded more noticeably than Danny’s had, and because it was located very close to her fontanel, the Schiffers again sought the advice of a specialist.

“This time, we knew what it was, but we took it upon ourselves to see the dermatologist,” Schiffer says. “I also was wondering how best to cover it without hurting her.”

As of June, Bryn’s hemangioma was still growing. But she is in no danger, and her mother has become adept at finding comfy, pretty headbands that draw the eye away from her birthmark. She will continue to see the dermatologist a couple times a year for the foreseeable future.

While both Schiffer children have what are known as strawberry cutaneous hemangiomas, some can grow deeper under the skin, resembling a raised bruise. Another form—the extracutaneous hemangioma—grows in an infant’s internal organs and are more likely to require treatment. Doctors typically only treat a cutaneous hemangioma if it disrupts vision, eating or breathing. Like Danny, most children with these birthmarks will see them begin to fade by the time they are 5 years old.

Schiffer says hemangiomas don’t usually bleed a great deal if disturbed or scraped accidentally. “I was told that they act kind of like a sponge when they bleed,” she says. “I am a little concerned about Bryn when she starts moving around more—walking and crawling—because of where hers is. But so far, we’ve been lucky.”

If other parents notice growing marks on their infants, Schiffer advises that the parents get their babies evaluated, and then try to put any concerns aside.

“Hemangiomas are more common than we think. As parents, things like this affect us more than they do our kids,” she says. “We just call them our strawberry babies. Today, we live in a world where people are more accepted for different things. We are all so different, so having a birthmark is not a big deal at all.”

The Game’s Afoot! A scavenger hunt can be super summer fun
Becoming a Dad: First-time fathers have their own concerns
To Top