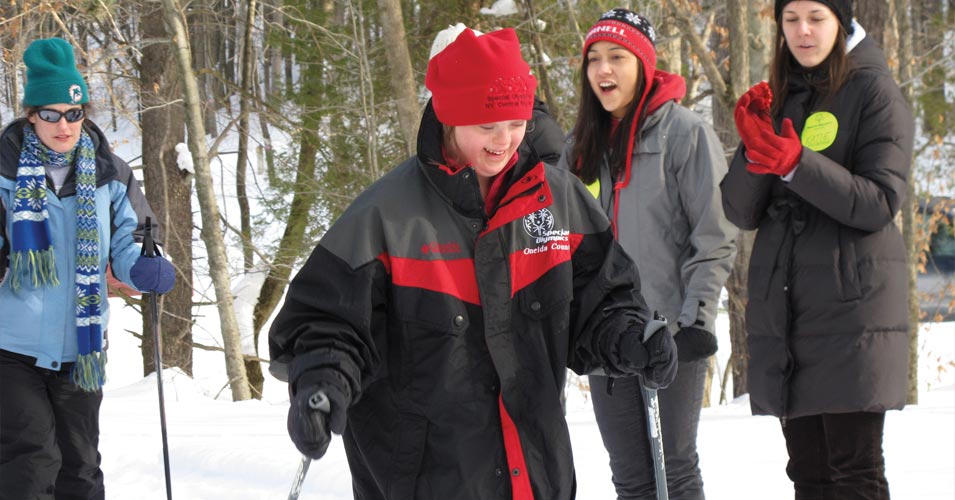 When I was a child, people with special needs were not seen regularly in society. There were institutions, or families kept the children in their homes. This made sightings, much less interaction, rare.

I was taught staring isn’t polite. Asking questions might hurt feelings. It seemed easiest to steer clear of people with special needs if possible. Pretend I did not see.

I remember one interaction from my eighth-grade year in Fishkill. That day I could not figure out where my lunch had gone. I wandered the hallway searching for the brown paper bag with the sandwich, cookies and apple.

I made my way down to the cafeteria of my new school and plopped into a seat with the group of girls I had become friendly with since moving.

Picking at my uniform, I pretended to be interested in their conversation while stealing glances at their sandwiches. An abrupt silence made me look up from the errant thread in my skirt, and I noticed everyone staring over my shoulder.

I followed their eyes to a student from another class standing there. I thought of him as The Boy With Something Wrong. He had trouble speaking and walked with a limp.

I finally realized he was saying, “I think I took your lunch. I’m sorry.” He handed me my bag, which had been opened.

I attempted a smile and said, “Oh, OK, thanks.”

He made his way back to his table and my friends began to chatter again. The waxed paper around my sandwich was wrinkled. The cookies looked intact, but I wasn’t sure about the apple. When I thought no one was looking, I slid out of my seat and threw my entire lunch in the trash.

A couple years later, now a high school student, I was reluctantly sitting in the bleachers of the Rhinebeck Aerodrome, where my parents had dragged me, waiting for the air show to begin. I had better things to do: talking on the phone, listening to music in my room, reading a romance novel.

Engrossed in my bad mood, I was startled when I felt a tap on my shoulder, looked, and saw a young man with Down syndrome staring back at me.

“It’s a nice sunny day, you should be happy.” He waited for me to respond. When I said nothing, he patted me on the back and walked away down the bleachers.

I was so unnerved I went willingly to stand close to my family.

With the birth of my first child, many years later, I could no longer look the other way. My daughter Amanda has Down syndrome. She also has had surgeries to correct breathing issues, and heart defects.

My world widened. I met families of children with Down syndrome. I was welcomed into the world of special needs. I became one of the “them” who used to make me uncomfortable. My family became “those people” I would try to avoid.

This new circle of people—children, parents, therapists, special education professionals—awakened an awareness. If you do not acknowledge and engage in conversation, you do not allow participation in life. When you look away, you make a person invisible.

I learned the behavior of my youth was not insensitive or rude. In fact it was pretty typical. But if I had had more experience interacting with people with special needs, I would have been more receptive. If I had felt more comfortable, I could have been kinder.

One organization that helped to open my eyes is Special Olympics. Amanda joined when she was 8 years old. She has trained in gymnastics, golf, soccer, tennis, track and field, and swimming. These activities give her the opportunity to learn sports skills, compete and socialize.

The New York State Winter Games are being held in Syracuse in February. This is a chance for typical families and individuals to learn more about people with special needs, and maybe rethink their beliefs. I say attend an event at the Winter Games!

Opening Ceremonies take place at the Pirro Convention Center on Friday, Feb. 21, 8 to 9:30 p.m. Participants from all over the state will represent their local teams. The ceremonies are free to the public and a great way to show support for Special Olympics and athletes with special needs. I dare you to not get chills when the music starts and athletes march in waving to the crowd.

On Saturday, floor hockey starts at 8:30 a.m. at the Oncenter. Across the street at the Onondaga County War Memorial Arena, figure skating begins at 11 a.m. Take this opportunity to go up to an athlete and give a high five or tell him or her “great job.” Ask someone about his or her training. Or just sit in the stands and cheer.

If you are up for a bit of travel, head to Highland Forest in Fabius, line the trail and encourage the cross country skiers.
Or go to Greek Peak and stand at the finish line of the alpine events. Ring cowbells, blow horns and show support.

Witness challenges not stopping athletes from reaching their goal of giving their best. Have conversations with your family and friends regarding the true meaning of success and winning. Realize that perceived disability cannot stop ability.