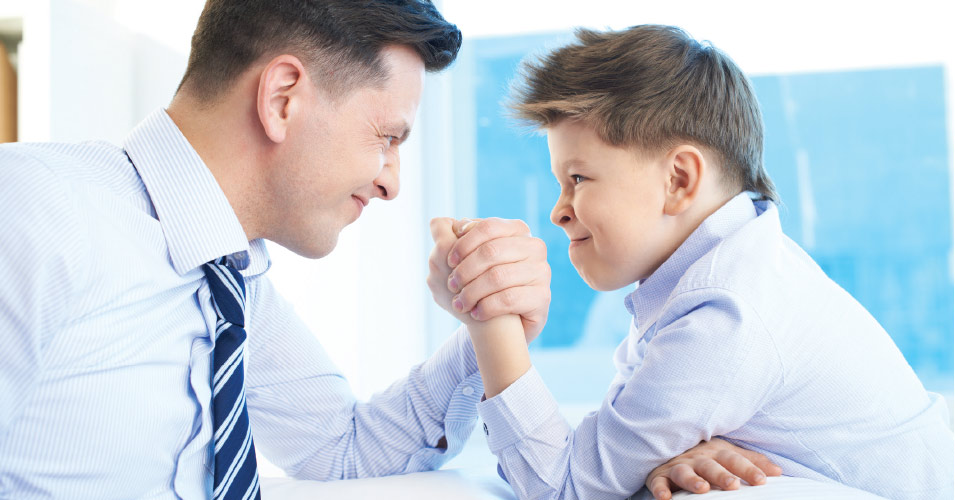 “Billy you have 10 minutes to end your game. It’s Tuesday, your day to help clean up the kitchen.”

“Just let me finish this level!”

On and on it goes.

We often encounter parents and kids locked in a power struggle. The issues vary, but the dynamic is the same. Parents are irritated, angry and cannot understand the kid’s behavior. The child continues the behavior—and gets into more trouble with his parent.

Certain misbehaviors are very common and considered normal. Power struggles generally fall into this category. Power struggles do not necessarily mean there is a psychological issue or problem. They arise from normal behavior and are particularly prevalent for toddlers and teens—two times when kids are establishing their independence. Some kids are so good at it they take it to an art form!

When dealing with power struggles, it’s useful for parents to know how to identify them, recognize the goal driving the behavior and have a planned response.

Power struggles can be the root of many problems between parents and kids. A power struggle is when a parent says, “You do this,” and the child’s words or behavior says, “No, I won’t, and you can’t make me.” And often he or she is correct. You can encourage a behavior, but often you do not have direct control over a behavior.

Behavioral examples of power struggles that say “You can’t make me” include:

Forgetfulness: She can’t remember to brush her teeth, take out the trash, etc.

Intentional inefficiency: He knows how to do the job, but does it poorly.

Underachievement: Most often seen with schoolwork and grades.

Untruthfulness: You can’t force her to tell the truth.

A parent’s own emotions are key in identifying a child’s motivation. You will know you are entrenched in a power struggle when you feel angry: Your child is challenging your authority, after all!

Kids learn at an early age how to please a parent. At some point they wonder what happens if they don’t do what the parent asks. When this happens, the parent is displeased and shows it. The child feels powerful, like he can control the parent’s reaction.

The key to avoiding power struggles is to disconnect the pleased/displeased reaction. This may seem like a small thing, but it can be a big shift in how you think of your role as a parent. Your goal becomes to foster intrinsic motivation in your child.

It’s relatively easy to disconnect a “pleased” response. Language is a way to accomplish this. For example, when a child brings home a good report card, a parent can respond “You must feel good about earning this grade” or “How do you feel about this test grade?” as opposed to “You made me feel proud” or “I’m so happy you are doing well.” You begin the process of giving back the responsibility for your child’s choices and effort.

You want your child to begin to move away from doing something to please or displease you and move toward completing a task because she finds it important. This seemingly small shift in words represents a big shift in a parent’s thinking. In this example how your child feels about her test grade becomes most important.

It’s harder to disconnect the “displeased” response. When a child has broken a rule or misbehaved, the parent strives to let the child experience the consequence. Some consequences are arranged, meaning the parent has come up with them. For example, if he doesn’t clean his room today he can’t go to a movie tomorrow. Natural or logical consequences are the ones where a parent doesn’t have to arrange a specific consequence but rather allows a consequence to occur. Homework not completed may mean staying in at recess. Dirty clothes not in the laundry basket means nothing clean to wear.

Although it can be difficult, parents can work to stay out of the way and let the situation run its course. Remember, reasonable struggles are good for kids. They build confidence and responsibility. Of course if the situation involves a safety risk or a struggle that is unreasonable for a child’s age, parents should intervene.

Rules and consequences can be framed as giving your child a choice. Follow the rule—or choose to break the rule and get a consequence. This means basic rules should have prearranged consequences attached to them. The consequence also needs to be something you have control over. If the child chooses to break the rule, the parent tries to remain matter of fact: Your child has made her choice and this is what will happen. You can still offer words of encouragement as she deals with the consequence of her choice, saying, “You can try again tomorrow.”

It may be tempting to think of a consequence you hope will change your child’s behavior forever. However, as a parent you want to consistently send the message “If you choose this course of action, this is what will happen”—small reasonable consequences applied over and over.

Often (especially when first establishing a new rule) a child will deliberately choose the consequence. Most often this is a way of testing the limits to see what is really going to happen. Try to remain calm and have faith in his ability to learn to make good decisions. This is not easy for a parent to accomplish and takes practice.

With power struggles, sometimes a kid is willing to cut off her nose to spite her face. Her goal is to prove how powerless her parents are to control her behavior. She thinks: “If I fail at school, I win; if I pass, I lose.” An ongoing power struggle robs the focus from what is important. She is not thinking about her education and future, she is fighting to win. Another casualty of ongoing power struggles can be the parent-child relationship. The quality of the relationship can erode because the parent and child are angry with each other much of the time.

Allow your child to be in control and independent whenever possible. Pick your fights carefully, giving your child opportunities to make many of the choices he encounters in his daily life. He may not wear the clothes you picked out, but it’s more important for him to be in charge.

Power struggles are common. While not abnormal, they can cause a lot of trouble between kids and parents. Recognizing them when they occur and disengaging your emotional reaction from your child’s behavior will help to keep the battles from escalating.

A Lasting Touch: Learning to care for someone starts early
Needle Points: Forty percent of U.S. teen girls have not gotten the HPV vaccine
To Top